News Update 11/20/2017 Our dear readers will notice a change around For Pride and Prejudice.  Over the weekend, we purchased a domain!  It is now officially http://forprideandprejudice.com.  We have also been extremely busy adding new content to ensure all of your questions are answered. We truly hope you enjoy your time here.  If ever you require any further information, please leave a comment on any page and we will get back to you with additional supporting details. Kind Regards, Krystal ________________________________ For Pride and Prejudice is a resourceful tool for avid readers to submerge themselves into the realm of Jane Austen's Pride and Prejudice. The book Pride and Prejudice is a beloved classic novel by British author Jane Austen.  The tale is set in Regency Era and follows the complicated rules of engagement between men and women, upper and lower classes, and how quickly misconceptions and prejudice can interfere with true happiness. Part of the cha
3 comments
Read more

What does Mr. Edward Gardiner do for a living?

He earns his income from “a very respectable line of trade,” and he lives near his warehouse in London, in Gracechurch Street not far from Cheapside.
Post a Comment
Read more 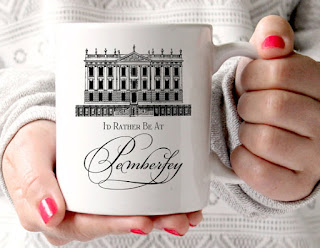 9 Ridiculously Perfect Pride and Prejudice Gifts for Christmas For those of us who appreciate the novel a little bit too much, it may come as a shock just how many gift options are out there. Luckily for you, I have done all of the hard work and found the greatest gifts for all of the lovely Pride and Prejudice fans out there. You're welcome :) So let's dig right in, shall we? 1.   This perfect mug available in Missbohemia 's etsy shop.  Currently priced at $10.90 with the sentiment "I'd rather be at Pemberley" this will make Christmas morning just so cozy. I mean, who could say no to that, right? Her shop is jampacked with other great gift ideas for the literary fanatic in our lives (usually us!).  I'd also love to know where Missbohemia gets that font for Pemberley as well. 2. At the very top of my Christmas list is this card game, Marrying Mr. Darcy Board Game ! I literally squealed when I saw it on Amazon.  All it needs
3 comments
Read more

8 Greatest Pride and Prejudice Infographics I have a confession to make. Sadly, I am but a humble fan of Pride and Prejudice. I am not an author, professor, researcher, or archivist who dutifully spends countless hours immersed in everything Pride and Prejudice. No my faithful fanatics. I have a day job. *gasp* My day job involves countless hours of reviewing lots and lots of data, squinting at spreadsheets and then presenting information. It is not nearly as glamorous as I just made it sound either. But fortunately for me (and for you!) I'm really good at my job. The reason for this is because I enjoy data. I love taking large datasets apart and presenting something meaningful. It's like a little treasure hunt and it is very rewarding... to me at least. In the coming weeks, I will be using these unique skills and combining them with my passion for Pride and Prejudice to bring you the most in depth Pride and Prejudice Infographics you will ever see. Want to know
2 comments
Read more

List of Characters in Pride and Prejudice Below is a list of the major characters included in the novel Pride and Prejudice.  See complete list of all characters including descriptions and analysis, on my Characters Resource Page . Elizabeth Bennet —protagonist, the second of five daughters; pragmatic and independent; her father’s favorite Miss Jane Bennet —Elizabeth’s older sister; wants to see the best in everyone; Mary Bennett —the plain, bookish middle sister Miss Catherine (Kitty) Bennett —easily led and shallow fourth daughter Lydia Bennet —the youngest sister, flirty and undisciplined Mr. Bennet —their father, cynical and permissive Mrs. Bennet —their mother, whose main goal is to find husbands for her daughters Charlotte Lucas —Elizabeth’s best friend Sir William and Mrs. Lucas —The Bennets’ neighbors Mr. Collins —the Bennet girls’ overbearing cousin, a priggish clergyman who stands to inherit Longbourn, the Bennets’ entailed estate The Gardiners —Mrs. B
2 comments
Read more

Biography of Jane Austen  Source:  PrideGuide Jane Austen was born December 16, 1775, to Rev. George Austen and the former Cassandra Leigh in Steventon, Hampshire. Like the families in many of her novels, the Austens were a large family of respectable lineage but no fortune. She was one of eight children. Her letters to her only sister Cassandra (the surviving letters date to 1796) are the primary source of biographical information. Although she never married, her letters to Cassandra and other writings reveal several romantic entanglements, including a very brief engagement (which lasted only one evening). She moved several times around the English countryside, but information about her work is somewhat sketchy. She began to write as a teenager, though kept her work hidden from all but her immediate family. Legend has it that while she was living with relatives after her father’s death in 1805, she asked that a squeaky hinge on the room’s swinging door not be oiled. This way, sh
1 comment
Read more

Source:  PrideGuide Jane Austen’s England  The English Regency The English Regency, in its most literal interpretation, encompasses the years 1811 to 1820. It began when the Prince of Wales was appointed Regent of England after his father, King George III, fell insane. The Industrial Revolution, which had begun in the mid-18th century, continued to bring innovation to the Western hemisphere during this era, while the political world remained entangled in wars and revolutions. In the Regency’s broader interpretation—when used to describe periods of art, literature, fashion, design, and architecture—the Regency can encompass years as early as 1790 and as late as 1830. Britain was transformed by the Industrial Revolution in the late 18th century. Until then most people lived in the countryside and made their living from farming. By the mid 19th century most people in Britain lived in towns and made their living from mining or manufacturing industries. Rules for Society During t
Post a Comment
Read more
More posts