A Description of Netherfield Park 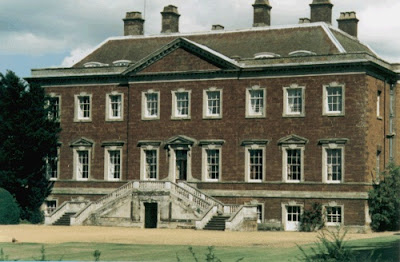 Netherfield Park is the name of a house not far from Longbourn (described as three miles away). It is first mentioned in the very second chapter of the book. That should let you know how important this particular building is to the story. Because Netherfield Park is so close, it is Mrs. Bennet's dream have one of her daughters married settled so close to home.

The house is rented by Mr. Bingley:

His sisters were very anxious for his having an estate of his own; but though he was now established only as a tenant...Mr. Bingley had not been of age two years, when he was tempted by an accidental recommendation to look at Netherfield House. He did look at it and into it for half an hour, was pleased with the situation and the principal rooms, satisfied with what the owner said in its praise, and took it immediately.

There is not much description on what the building actually looks like. There is no reference to size or color or anything like that. All Jane Austen tells us is the  building is about 3 miles from Longbourn. Thanks Jane.

What we can deduce from the text is that because the name of this home ends in the word Park it must be a great house indeed. At the time grand houses or estates sometimes were given stately names and included on tours attended by the elite society.